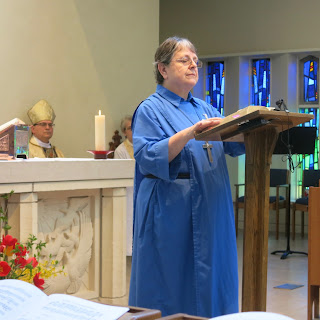 Sr. Louise was born in Victoria, B.C. as her parent’s first child, followed three years later by her sister. She attended early school there before moving to Chemainus, B.C. for high school and then Nanaimo for college. Her interests included swimming, sewing, ballet, figure-skating, Brownies, Guides, Pathfinders, eventually taking on leadership roles. (She still does warm-up exercises as “it’s really helped with maintaining my joint flexibility”.) “We always had a dog which helped me to have a love of animals.”

Sr. Louise was married for a short time (very young) and has a son and two grandchildren. She worked at Eaton’s in a variety of departments, then back to college for computer courses and into office work. When that company closed “I found it difficult to find work within that field – I was just too old.”

Louise finally settled on a seniors’ residence where “getting to know those folks greatly enriched my life.” This was the turning point for her as she became restless in her spiritual life. She learned about SSJD and attended the discernment programme in 1999. “This seemed the answer to the deep calling I was feeling at the time – and it still is.”

Entering the Community at age 47, Sr. Louise’s first branch house experience was at St. John’s Rehab Hospital which “was – and remains – one of the most fulfilling ministries I’ve been involved in”. Other highlights for her included trips to the Anglican/Episcopal religious communities which “helped me to discern more clearly my call, not just to the religious life but to SSJD in particular.” Louise returned for a time to Victoria in a new ministry as the Oblate Director, a position that she said she took “very seriously and with deep regard for the women who are Oblates.” Through family and marriage difficulties, “I have always felt God’s presence with me – and now…. I have the love and prayers of my Community and I have Sisters that I love and pray for.”
Posted by Sisterhood of St. John the Divine at 12:00 AM