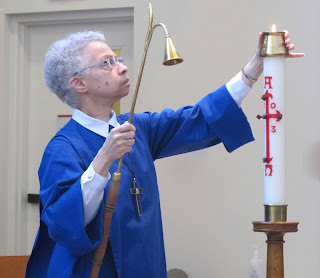 The path to the Convent can be rather circuitous. Although a cradle Anglican, like many others Sr. Helen Claire didn’t know Anglican convents existed until the 1980’s.

“I grew up in Kingston, Jamaica, towards the end of the colonial era. I had an idyllic childhood in a gentler time and place”. After graduating from the University of the West Indies in Spanish and economics, she worked with the tourist board for two years then emigrated in 1970 to Toronto, “the city I know best and loves,” she says. “I’ve been here ever since, except for a year in Paris to try and learn French and a year at our branch house in Montreal”.

For 13 years Sr. Helen Claire was with the Ontario provincial civil service in communications working on internal house publications. When she returned to the church in 1984, she met an SSJD Associate who introduced her to the Sisterhood and the Convent. Laid off in June 1996, she did the Women at a Crossroads programme that July, stating clearly on the application form: “I’m not interested in the religious life but I am at a crossroads.” When the programme ended seven of that group expressed the intention to join the Convent. “I was not one of them.”

Months and travels went by and then she returned for a retreat and realized “why my job-hunting had been half-hearted.” Entering in 1998 at age 54, Sr. Helen Claire has worked mainly in the Associate Office and Guest House. She also had an assignment as sacristan in the chapel that she said suited her as she preferred to work in the background and was good at details.

She ended by saying, “If you want to learn a language, you go and live with the people who speak it. I came to SSJD to learn the language of love. It will take me the rest of my life to do so.”
Posted by Sisterhood of St. John the Divine at 12:00 AM