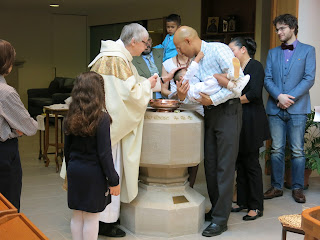 Along with her brother, Sr. Constance Joanna was born and raised in Cleveland, Ohio. Her parents shared Swedish roots but met in Chicago at the 1933 World’s Fair.

She learned to play the piano early on but gave it up at age 10 “because I wanted to be outside playing not inside practising”, then picked it up later along with the organ. “Music was a huge part of my life. I don’t think I was ever away from a choir.”

Sr. Constance Joanna got her undergraduate degree in English, and then her MA followed by a PhD in American Literature and Linguistics. Five years teaching in Detroit and a year as a Fulbright Professor in Germany were followed by a tenured position at Virginia Tech.

“I grew up in the Methodist Church and, although I was later confirmed in the Episcopal Church, I always loved John Wesley, especially the way he talked in his journal about how his heart was ‘strangely warmed’. I aspired to be that myself but it was many years before I discovered that God was around me all the time. This gave me the courage to accept that God could call me out of teaching into the Sisterhood….

I thought I was giving up teaching, but it was my first true ‘vocation’ in the sense that I felt God truly called me and gave me gifts for that. I had become an Associate through my friends at the Cathedral in Detroit and was a regular visitor at the Convent from 1972.”

In 1984 at age 43, Sr. Constance Joanna came to the Sisterhood “not sure whether I was called to be a Sister or a priest. Eventually I had the great blessing of fulfilling both…. I’ve worked at several areas in the Convent and in many roles at St. John’s Rehab. I also had both the joys and the heartaches of being Reverend Mother for 11 years.”
Posted by Sisterhood of St. John the Divine at 12:00 AM