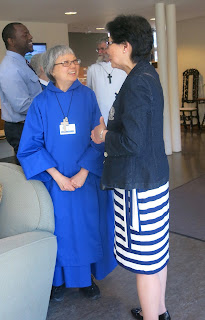 Sr. Amy Joy was born and raised in Hong Kong, coming to Canada in 1973 to further her study and was graduated at the University of Toronto with a BA in Economics in 1977. She received her Canadian citizenship in 1978, but returned to Hong Kong that same year to take over her Father’s business following his death. Her brother who worked together with her died suddenly the following year. These two deaths in such a short time had a severe impact on her, and she crashed emotionally.

Religion had not been a major concern in her life to that point; but in 1989, a relative introduced her to Jesus. She was baptized the same year, and found a welcoming Methodist Church nearby. After her conversion, there was a break-through for her. Study used to be a difficult task for her, but in Christ she was able to continue her study and received her MBA from Zhongshan University in China (1993-1996). She was later trained and equipped by the Hong Kong Methodist Church in lay ministry and joined several mission trips with her church. The mission trips to Malaysia in 1998 and Cambodia in 1999 were highlights.

Sr. Amy Joy returned to Canada in 2001 to study for and obtain her Master of Divinity from Toronto’s Tyndale University College and Seminary in 2004. Following graduation, she worked as a Pastor with the North Toronto Chinese Baptist Church, specializing in women’s ministry until 2011.

She left to pursue a Master of Divinity in Spiritual Formation from Tyndale, completing this degree in 2012. She is currently pursuing her Certified Spiritual Direction credentials from Tyndale. In the meantime, she joined the SSJD Women at a Crossroads program during the summer of 2012, and learned about the importance of balance in life for the first time.

In September 2012, she joined the Alongsider program until September 2014 then applied to enter the Community as a Postulant. During this time, she has undertaken a variety of duties - assisting in the Guest House; as part of the St. John’s Rehab team; and, as the Volunteer Coordinator.

In April 2015, she became a Novice, and is assigned as the Sacristan Assistant. She finds this work in the Chapel challenging due to the discipline and detail required; however, she is also discovering its joy. A highlight for Sr. Amy Joy since entering the Sisterhood has been the incredible sense of peace, belonging and acceptance that have come from living and worshiping with community, a new and wonderful experience for her.
Posted by Sisterhood of St. John the Divine at 12:00 AM