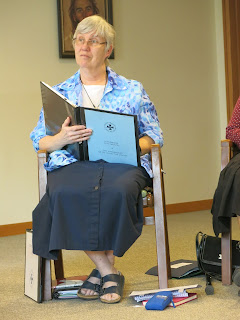 Hamilton, Ontario was Sr. Dorothy’s birthplace, but she moved to Burlington following her adoption at the age of four, and lived there until she was 10. She has a younger sister and brother, an older sister and, until his recent death, an older brother – all of whom were adopted. After moving to Bracebridge, she attended school taking business and commercial courses and became a legal secretary.

“At age 17, I asked my priest about Anglican orders and he contacted SSJD who advised that I had to be 21”. She married in 1973, had two sons and “was an at-home Mom and returned to work in 1989”. Her interests had included horseback riding, cross-country running, nature and the out-of-doors, church groups, Bible studies and volunteering at a retirement home.

After her divorce in 1995 Sr. Dorothy, in frustration, explored a variety of jobs and activities “seeking the path God was calling me to”. A visit to the Convent was suggested and “I knew as soon as I entered the door”. Weekend visits in 2000 to experience the Community, “a talk regarding becoming an ‘Associate’ only it came out ‘Sister’ – and the process started”.

Sr. Dorothy entered in September 2001 at age 48. Highlights have included “learning and experiencing community in a different way when I thought I was being called to a deeper sense of prayer”. Regarding her time at the Montreal branch house – “I didn’t want to go, but it was the best experience I could have had…. Every ministry has its own blessings and gives something God wants you to have.”

Throughout her experience with breast cancer, Sr. Dorothy was very aware of much caring support from all levels of the Community. “One of the things I really like about Community is the way we work towards consensus – discussing and making decisions together – something the monastic life can offer the world”. A personal highlight for Sr. Dorothy has been attaining the status of “Grandma”!
Posted by Sisterhood of St. John the Divine at 12:00 AM