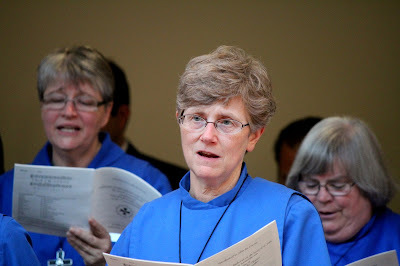 Born in Sudbury, Sr. Elizabeth Ann recalls “a happy city where multi-cultural people helped each other through hard times – a good place to grow up”. She was one of six children (but two brothers died in childhood). She now has two brothers and a sister. Her parents sponsored several children through Foster Parents Plan including one foster brother from Korea whom she met in the summer of 2012 when he came to visit Canada.

At age 10 she moved to Toronto and connected with St. Matthew’s Islington. Then at age 16 she moved to North York and joined St. John’s York Mills. High School, mainly through the Alternate and Independent Studies Program, was followed by Forestry at Lakehead University while attending church in Port Arthur.

Having had earlier involvement with church pageants, Sunday School, and Junior Auxiliary, she joined the choir, drama group and became a server. She began to explore Christian Meditation, reading The Cloud of Unknowing, The Philokalia, and going for a month’s visit to the Convent. “I was caught up in the silent pauses in the recitation of the psalms; the touch of God was in that silence”.

She returned to university and then worked at Weall and Cullen Nursery Garden Centre and in 1987 entered SSJD at age 30. Her interests have included science fiction reading, Chinese brush painting and art as an expression of spirituality, calligraphy and writing Haikus. “I love to cook and I love to bake!”

Highlights for Sr. Elizabeth Ann in Community include her time in Montreal “helping to open the house and getting the ministry going; living in a different kind of culture…. I love life in general – there’s ups and downs”. Called back from Montreal in 2000 to be assistant to the Reverend Mother, she was then elected to that position in 2005 and states that “although you experience difficulties at times, you really get to understand what is the grace of the office…. God really does sustain and help you do what you could not do alone…. It’s really quite amazing!”
Posted by Sisterhood of St. John the Divine at 12:00 AM