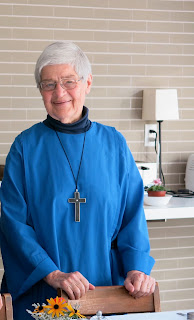 At 13 Beryl went to Regina to the Qu’Appelle Diocesan School (QDS) for five years, then began BA studies at Regina College, completing them in Saskatoon at the University of Saskatchewan. Intending further studies she went to England, “ambled about doing various jobs”, returning to teach at QDS in ’52 and to Toronto in ’53 for MA studies in English.

Hearing about short term missionary work in India (as well as thinking about the Sisterhood), Beryl set off via England where she worked in summer agricultural camps and a UN camp in Austria. She sailed from Southampton to Bombay via the Suez Canal during the Suez crisis in ’56. After four and a half years teaching in India, she came to the Community “feeling well-marinated in SSJD” through her times at QDS. “A lot ended but a lot began”.

She returned to QDS three more times as a Sister, the last as headmistress and oversaw the closing of the school – a “low-light” for her, but aware that “tough times are important to our learning”. A highlight of the Priory in Edmonton was when she and Sr. Jean were asked “to do something for the poor”. They joined a United Church project in which Sr. Beryl started an adult literacy programme that expanded and still exists as “The Learning Centre”.

After 13 years Sr. Beryl returned to the Convent, continuing [in] the role of Associate Director but now for Ontario and the Eastern US; then six years at Maison in St. Lambert, Quebec. Through all the years “the friendships and relationships were gift – and now the opportunity of doing spiritual care at the Hospital [SJRH] – a highlight for me”.
Posted by Sisterhood of St. John the Divine at 12:00 AM